About the New Madrid Seismic Zone

The New Madrid Seismic Zone (NMSZ) extends 120 miles south from Charleston, Missouri, following Interstate 55 to near Marked Tree, Arkansas. The NMSZ consists of a series of large, ancient faults that are buried beneath thick, soft sediments. These faults cross five state lines, the Mississippi River in three places and the Ohio River in two places.

The New Madrid Seismic Zone is active and averages about 200 measured events per year (magnitude 1.0 or greater). Tremors large enough to be felt (magnitude 2.5 – 3.0) occur annually. On average every 18 months, the fault releases a shock of magnitude 4.0 or greater, which is capable of local minor damage. A magnitude 5.0 or greater occurs about once per decade, can cause significant damage and be felt in several states.

The highest earthquake risk in the United States outside the West Coast is in the New Madrid Seismic Zone. Damaging earthquakes are not as frequent as in California. But when they do occur, the destruction covers more than 20 times the area due to the geologic differences between the two regions.

The Great New Madrid Earthquakes of 1811-12 were a series of over 2,000 seismic events, which occurred for approximately five months, beginning December 16, 1811. Several of those earthquakes are believed to have been magnitude 7.0 or greater. There were reports of church bells ringing in Boston and of shaking being felt as far away as the Caribbean. The town of New Madrid was destroyed. According to the United States Geological Survey (USGS), the earthquakes caused ground warping, sand eruptions, fissures and landslides along river banks. They are believed to be the largest earthquakes east of the Rocky Mountains in the history of the U.S.

A damaging earthquake in the NMSZ 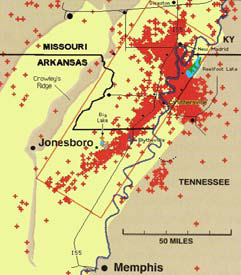 of magnitude 6.0 or greater occurs about once every 80 years. The last of that magnitude was a 6.6 event in 1895 near Charleston, Missouri. The USGS reports there is a 25 percent to 40 percent chance of a similar size earthquake occurring within 50 years. Un-reinforced masonry buildings and other structures from Memphis to St. Louis could experience serious damage. The USGS reports that catastrophic upheavals like those in 1811-12 could visit the New Madrid region every 500-600 years. However, even though the chance is remote, experts suggest there is a 7 percent to 10 percent chance for a large earthquake similar to the 1811-12 New Madrid events in the next 50 years.

Where do earthquakes occur? In the central United States annually, the greatest numbers of earthquakes are associated with the area just south of the confluence of the Ohio and Mississippi rivers. However, other fault zones produce felt earthquakes, including some that have caused structural damage and injuries.

Our greatest concerns are magnitude 6.0-7.6 events, which do have significant probabilities in the near future. Damaging earthquakes of this magnitude are very likely within the lifetimes of our children. The USGS stated a 7.6 magnitude earthquake would likely be the strongest event that could occur in the NMSZ.

What is site response? Site response refers to the observed or predicted behavior of geological materials to earthquake shaking. Geologic hazard maps define earthquake hazards based on the distribution types of these unconsolidated materials. River or stream sediments can liquefy during large earthquakes and cause damage to structures as they partly sink or tilt. Ground motion can also be amplified in areas that have soft, thick soils. Areas that have thin and stiff soils over dense hard bedrock can be expected to have lower levels of shaking and associated structural damage.

What can we do to protect ourselves? Education, planning, proper building construction and preparedness are proven means to minimize earthquake losses, deaths and injuries. In recent years, San Francisco and Armenia both experienced 6.0 to 7.1 magnitude quakes. San Francisco prepared by defining potential geological hazard areas, adopting earthquake resistant building design codes and educating the public. Armenia had not adopted similar hazard planning strategies. San Francisco suffered 67 deaths and less than $7 billion in property losses. Armenia had over 25,000 deaths and sustained more than $20 billion in property losses. In October 2009, the Vanuatu region northeast of Australia had three earthquakes of 6.8 to 7.7 magnitude. Losses were minimal in this event because the epicenter was in a remote location.

Remember to "Drop, Cover and Hold On"when you feel shaking! The Southern California Earthquake Center is one of many official agencies that urge you to “DROP, COVER and HOLD ON” as soon as shaking begins. The center reports that search and rescue

teams that have been involved in rescues of trapped survivors in the U.S. and other countries have concluded that “Drop, Cover and Hold On” is the best way to reduce injuries and deaths during an earthquake. This is also the consensus among emergency managers, researchers and school safety advocates. If you feel shaking, DROP to the ground immediately, take COVER under a sturdy desk or table, and HOLD ON until the shaking stops.

We have a choice. We cannot prevent an earthquake – it will happen – but we can reduce the potential loss of life. You can go to the Missouri State Emergency Management Agency’s website to download earthquake information. You can also call SEMA at (573) 526-9100 for free literature on protecting yourself and your property. 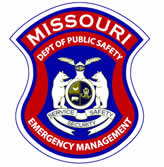 This fact sheet was prepared by the State Emergency Management Agency in coordination with the Missouri Department of Natural Resources Division of Geology and Land Survey. (Revised - March 2010)